Saturday’s rearranged Coral Welsh National must pass an early inspection but if it gets the green light then take TRUCKERS LODGE (Chepstow, nap, 3.10) to go one better than last year.

The selection bumped into a well-handicapped and very well-supported winner 12 months ago in the shape of Potters Corner, but for a horse having just his fourth start over fences, he ran a blinder in the hands of talented conditional rider Lorcan Williams.

The Tenby-born jockey has struck up a good relationship with the nine-year-old, so much so that their unfortunate parting at Kelso in October when travelling well was the first time in six outings when the combination had not finished first or second.

Truckers Lodge, ridden by Tenby-born Lorcan Williams, is a hot tip for the Welsh National

That enviable record also includes the Midlands National in the spring, when the duo turned a competitive handicap into a rout to score by 18 lengths. And there is every reason to believe, with conditions to suit this afternoon, that Truckers Lodge can post another bold showing.

Bar capsizing at Kelso, the Paul Nicholls-trained son of Westerner has looked an assured conveyance over fences.

If he can find the same rhythm over the obstacles as he managed 12 months ago, his knowledge of Saturday’s venue —112412 in six outings at the track — should also stand him in good stead. 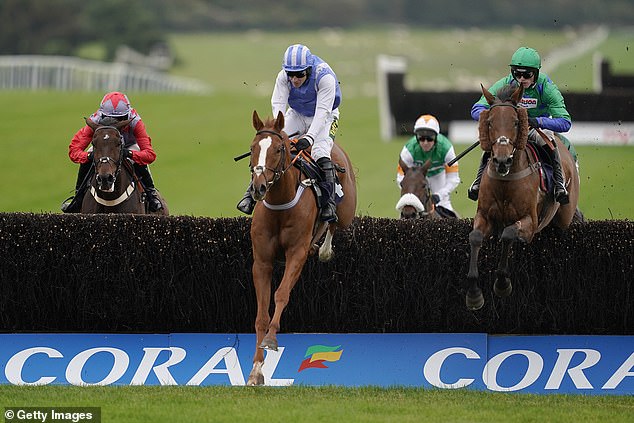 It is not difficult to understand why Secret Reprieve has been ante-post favourite since the beginning of December.

A fluent 12-length defeat of The Two Amigos earned the progressive seven-year-old a 4lb penalty for this race as the weights were already published prior to that race.

However, if the handicapper had the chance to evaluate that victory again, then Secret Reprieve would have an extra 8lb to carry.

Sitting at the foot of the weights and hailing from a yard with an excellent record in staying handicap chases, it is not difficult to see why he is at the head of the market for Saturday’s marathon.

However, at the odds Truckers Lodge is narrowly preferred with his stamina assured.

And there is a saying at the Nicholls stable in Ditcheat that ‘If anyone can, Lor-can’, so I’m happy to put my trust in the stylish Welshman to lift Saturday’s feature.

FRENCH RACING TIPS: All the best bets for Saturday’s racing at Clairefontaine