So what future is there? Trainers fear it’s a crisis point for UK racing after only five Festival winners

Eleven-time champion trainer Paul Nicholls says British jump racing must learn the lesson of last week’s one-sided Irish domination of the Cheltenham Festival, saying the current structure of the sport in Britain is promoting a ‘culture of mediocrity’.

Nicholls’ view is supported by colleague Dan Skelton who believes the lopsided scoreline of a record 23 wins for Ireland and only five for British-trained horses has uncovered some unpalatable truths.

The tally improved on the record of 19 Irish wins in 2017 and reflects a general pattern of increasing Irish success. It was as recently as 2006 when their 10 wins were a first-ever double-figure tally.

Nicholls and Skelton believe a combination of factors are in play with better prize money meaning the most talented horses are either being retained in Ireland or bought and taken there by big-spending Irish and British owners.

Questions have also been raised over whether British racing has too much focus on handicaps and betting opportunities to the detriment of a programme which allows better quality horses to gradually rise through the ranks so they can peak for the Cheltenham Festival. And the handicapping of British-trained horses is another area of focus.

Nicholls, whose best Festival finish was Next Destination’s second in the National Hunt Chase, said: ‘We don’t want a knee-jerk reaction but there are a whole list of issues. We need to sit down and have some constructive discussions, reflect and see what we can do to improve.

‘We have to look to the young people for the future and see what we can do to make the industry better. There is too much racing in Britain and not enough prize money. You end up with a culture of mediocrity and too many handicaps and too many moderate horses.

‘In Ireland they don’t have quite so much racing, great prize money and people are buying great horses to get to the top.’

Skelton, who had two seconds and two thirds at the Festival, added: ‘Anybody involved in British racing who went to bed on Friday night comfortable with the position needs to take a look at themselves. It simply wasn’t good enough. We all have to get better, whether we’re trainers or a different professional in the sport. We’re getting outplayed and we need to address why. 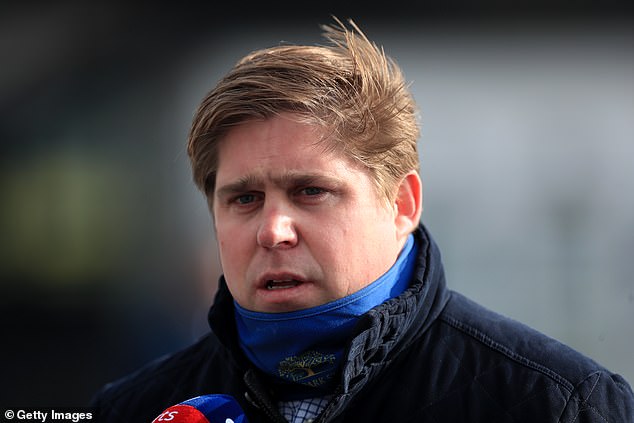 ‘For some time now there has been a lot of concern about the British system and prize money.

‘An intense sporting amphitheatre uncovered the cracks and the truth is sometimes unpalatable. There’s no point getting the patient on the operating table and giving him an aspirin. Things have to change. I’m 35 and want a future in this sport and, let’s talk straight, in its current format that future is not there.’

The headlines garnered by the outstanding Rachael Blackmore with her six winners including Honeysuckle in the Champion Hurdle cannot mask that it was a bleak week for British jump racing summed up by the 1-2-3 led home by Henry De Bromhead’s Minella Indo in the Gold Cup. It was left to Nicky Henderson’s Shishkin to supply the most sparkling British win of the week in the Arkle Novices’ Chase but even his chance had been improved after the Willie Mullins-trained Energumene went lame and was pulled out.

The signs are ominous for the Grand National in three weeks’ time, given Tiger Roll has led home an Irish 1-2-3 for the last two renewals of the race.