It was clear this was far from a normal Cheltenham Festival way before reaching the track on Tuesday.

Where normally there would be an Everest of Racing Post newspapers in the Sainsbury’s Local ready for the punters, there were none at 9am. No demand, so no supply.

There were no queues of cars snaking from the best-known circuit in jump racing. No lines of racegoers at Cheltenham Station waiting to board the bus to the track.

The Cheltenham Festival opened but it was as if the town had forgotten one of the biggest sports events of the year was taking place.

Those who attend the occasional race meetings during lockdown have become accustomed to the deserted stands, but the bigger the meeting the more eerie the vast open spaces seem. And they don’t come any bigger than the Cheltenham Festival.

It didn’t look much like the meeting many love and recognise on Tuesday. The 30,000 square metres of hospitality complexes were stark, bare hard standing.

Where crowds normally congregate on the turn into the back straight were four parked JCBs — a nod to a sponsor later in the week, and other sponsors’ banners were draped over the bare steps. 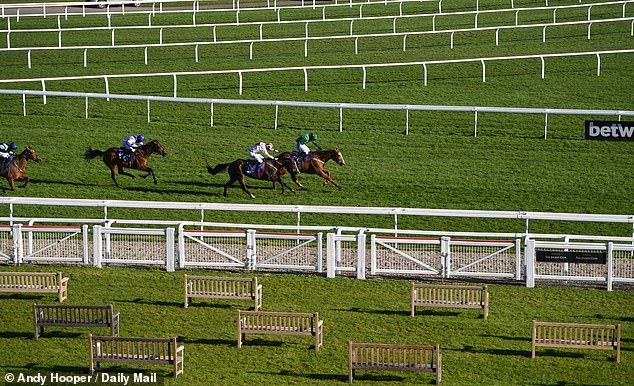 In the building behind them, over 100 grooms have taken up residence in an Irish village, each with their own en-suite cabin. Before racing started a couple of jockeys embarked on a run around the track. The Loneliness of the Long Distance Runner came to mind.

The few trainers and officials present — there were 16 people on the grass in the centre of the paddock as the runners circled for the opening Supreme Novices’ Hurdle — tried their best with some enthusiastic clapping but, as Vintage Clouds returned after winning the Ultima Handicap Chase, you could still hear the calls of seagulls flying overhead. 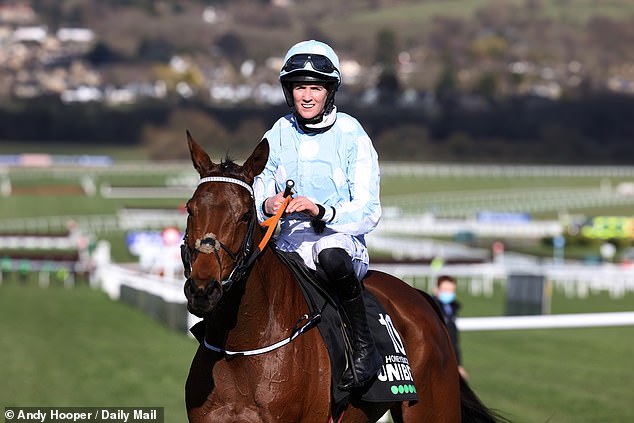 But the alien environment did not diminish the feeling of satisfaction from winners.

The trainer said: ‘It is a strange place today and it’s going to be a strange week. It still doesn’t make it any easier watching them — it still gives you the same feeling. But a winner is a winner here, and they are very special.’

The 2021 Cheltenham Festival is in holding formation, waiting for better times to return. But it will not stop us celebrating some memorable moments of glory from horses, and their trainers and jockeys.