British racing relies on Lingfield to provide the afternoon’s entertainment after a week of freezing temperatures claimed Saturday’s cards at Newbury, Warwick and Chelmsford.

Thankfully, the efforts of the British Horseracing Authority have meant that Warwick on Monday and the illustrious Betfair Hurdle card at Newbury (a week on Sunday) have been rescheduled and saved, much to the delight of jumping fans.

National Hunt enthusiasts may enjoy a fix if Naas passes an inspection on Saturday morning, but Exeter’s eight-race card on Sunday looks likely to be the first UK jumping fixture staged for a week if the thaw arrives.

Stopnsearch (blue, centre) is one of the best bets if the action goes ahead at Lingfield

Hopefully, Lingfield keep the show on the road on Saturday and STOPNSEARCH (Lingfield, nap, 3.10) appeals as one of the best bets on the card if the meeting gets the green light following an inspection on Saturday morning.

It is fair to say the son of War Command favours the Surrey venue as all three of his career wins have been achieved there, two on the turf track and the other success by a length 12 months ago on the Polytrack. 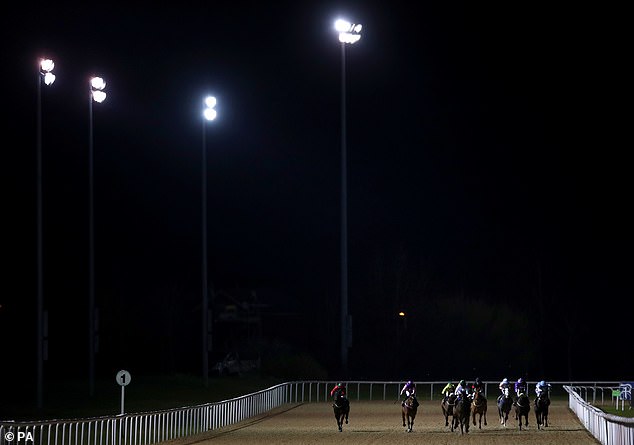 The selection was slightly unfortunate not to make that four Lingfield victories when failing by a short head to reel in Noble Peace in a course and distance handicap here earlier this month and I am hopeful he can gain compensation for a luckless run on his penultimate start in a similar event.

Arij (Wolverhampton, nb, 7.45) has proved a rather expensive horse to follow in recent times, having twice been beaten when favourite by narrow margins.

However, the four-year-old has been nailed close home having attempted to make the running on his last two outings, once by Dark Pine, who re-opposes on Saturday, and last time when a rival knocked rider Hollie Doyle’s whip out of her hand.

Fingers crossed he, too, can gain reward for some creditable performances.

Heaven Help Us wins the Coral Cup at Cheltenham Festival

Racing returns and wonder horse Pinatubo could even outshine Frankel