ROYAL ASCOT TIPS – DAY THREE: Soft-ground lover Trueshan can stop Stradivarius in the Gold Cup, while Noon Star should enjoy the step up in the Ribblesdale Stakes

The Gold Cup (4.15) headlines day three of the Royal meeting and all eyes will be on Stradivarius as he bids to land a record-equalling fourth victory.

The Group 2 Ribblesdale Stakes (3.40) showcases some of the best three-year-old fillies around including Noon Star, Divinely and Eshaada.

Our experts dish out their selections below.

The prospect of heavy overnight rain could upset some of the best-laid plans, however GO BEARS GO has already proved his effectiveness at today’s venue with some cut in the ground courtesy of an impressive debut in May and could be worth supporting. A 150,000gns breeze-up purchase, the selection clearly knew his job well, quickening smartly from the front to score with a degree of comfort. Deteriorating conditions should be no issue for Go Bears Go who is taken to try to lower the colours of Dundalk scorer Cadamosto and American raider Lucci who both represent powerful stables at this level. Korker should also go well.

Ante-post favourite Mohaafeth was an 11th hour absentee from the Derby on ground considered too soft so it will be interesting to see how connections react to the prospect of an easy surface if the storms do arrive. ONE RULER is one horse which won’t mind a deluge and this interim trip of 10 furlongs could prove to be his optimum after he looked to fail to get home in the Derby on a soft surface. The selection had previously acquitted himself well in the 2000 Guineas considering it was his comeback and can hold off the likes of Movin Time, who himself looked a classy colt in the making at Newmarket last time.

A below-par blood count ruled NOON STAR out of a trip to Epsom for the Oaks but that may have proved a blessing in disguise for connections given the way her York conqueror Snowfall spreadeagled what appeared a competitive field that day. Given her breeding, Noon Star should find today’s step up to 12 furlongs to her liking, while the prospect of some ease in the ground should suit a filly which won over a mile on soft ground at Nottingham as a juvenile. Divinely was third in the Oaks and rates a danger along with the progressive Eshaada, while Ad Infinitum could reach the frame on easy ground. 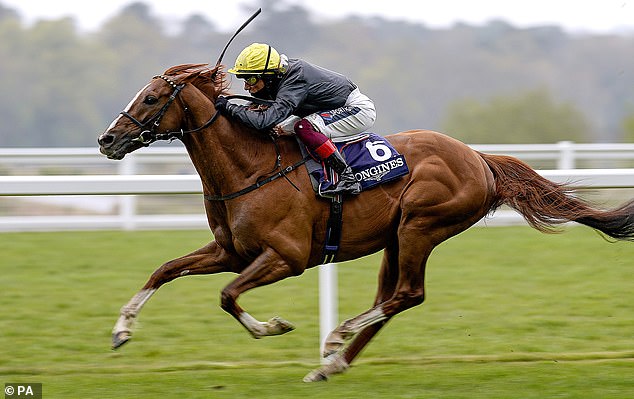 Triple winner Stradivarius bids to join Yeats as the only horse to win four Gold Cups and those suggesting he is past his best may do well to recall his 10-length romp in last year’s renewal when similar suggestions were being made. He is clearly a difficult horse to oppose on his home turf and his perfect blend of stamina and speed again make him the one to beat. However, there is a chance we haven’t seen the best of soft-ground lover TRUESHAN yet and he routed a competitive field here in October to announce himself on this stage. If the rain arrives, he must have a solid chance.

There is a fair bit of risk siding with seasonal debutant dubai HONOUR in such a fiercely-contested handicap, however his stable is brilliant at readying a horse first time out and he is the sole runner for a trainer with some very useful three-year-old ammunition. The selection also boasts some excellent form with cut in the ground so could be a sporting bet to emulate his predecessor, Fast Or Free, who won this in 2012. Needless to say, there are a raft of contenders with Horoscope, Raadobarg and Star Of Orion all of interest if the ground deteriorates.

A wide draw has been an advantage in the last decade with 46 of the 60 horses to finish in the first six hailing from a double-figure berth so surrey gold could go close if the forecast rain does materialise. The selection is pretty ground dependent so confidence would be minimal if the thunderstorms miss Ascot, but he was highly impressive at Newbury and his yard have twice gone close in this race previously. Sir Lamorak was considered for the Derby so is hugely respected following his Leopardstown romp, while the hat-trick seeking Siskany is also feared.

VOLATILE ANALYST has his quirks, but he displayed plenty of quality to beat Tomfre at York on easy ground over today’s trip. The selection boasted the quality as a juvenile to finish fourth in Group 2 company and, although it has been a while between drinks, he recorded a clear careerbest on the Knavesmire. Stall 32 might be a blessing or a curse, but if the stands rail is favoured after the rain, he could outrun his odds. Ropey Guest finished in front of Symbolize in a similar 7f handicap here in May and both should go well again.