Rajinsky can hit the bullseye

RAJINSKY (Haydock, nap, 2.55) just missed out on a big prize at York’s Ebor meeting last month but he can hit the bullseye in the Old Borough Cup this afternoon. Only Irish raider Arcadian Sunrise proved too good on the Knavesmire and a repeat of that run will see him go very close.

Rajinsky has run creditably at Haydock — three runs have yielded two second places — and his trainer Tom Dascombe is often the man to follow at the Merseyside track. In the last five years, Dascombe, who is based at the Cheshire stable owned by former England striker Michael Owen, has sent out 57 winners at Haydock, over 20 more than his nearest rival. A £1 bet on all off his runners would have yielded a profit of over £100.

WAHRAN (Ascot, 3.10) had his progress slightly derailed when he also lost out at York’s Ebor meeting. But his fifth place behind Migration in the Sky Bet Handicap was better than it sounds as he was short of racing room late on.

The colt ridden by Ryan Moore and trained by Sir Michael Stoute steps up two furlongs in trip but that should be taken in his stride. 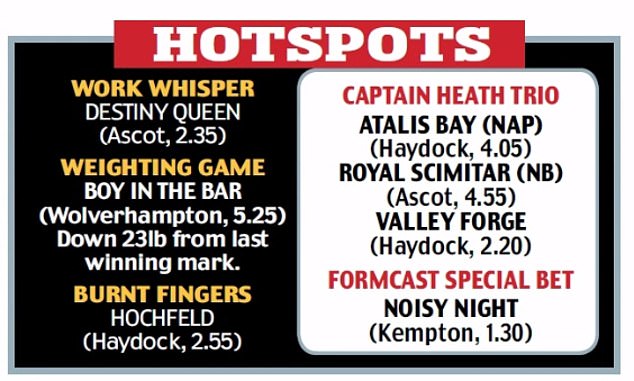