Hurricane Lane is on a collision course with Derby-winning stablemate Adayar at next month’s Prix de L’Arc de Triomphe — after blowing away rivals with a two and three-quarter length win in the Cazoo St Leger.

The son of Frankel, who gave trainer Charlie Appleby his first victory in the final Classic of the season and Sheik Mohammed’s Godolphin operation its seventh, is 6-1 for the big European showdown at Longchamp on October 3.

Only Adayar (4-1), Aidan O’Brien-trained Snowfall (7-4), who runs in the Prix Vermeille at Longchamp this afternoon, and Saturday’s Irish Champion Stakes runner-up Tarnawa (5-1), are ahead of Hurricane Lane in the Arc betting. Jockey William Buick could have a tricky decision over which Appleby contender he rides in Paris.

Buick said: ‘They are two fantastic colts. Hurricane Lane has only just passed the line in the Leger so we will let the dust settle. They both have to get there and then we will have to make a decision but we will enjoy this first.’

For Buick, who also won the St Leger in 2010 with Arctic Cosmos and 2011 on Masked Marvel, yesterday’s win on the 8-11 favourite was plain sailing.

Buick added: ‘It went exactly how we hoped it would. We thought he would stay and had as good credentials as anything in the race. He never wasted any energy and when it came to push the button it was instant and he put the race to bed.’

Hurricane Lane’s only defeat this season came when he lost his two front shoes and finished third in the Derby.

Appleby said: ‘The great thing about this horse is that for a staying horse he has a gear change. It could not have been more comfortable watching.’

That Epsom Derby form is looking strong now, as Richard Hannon-trained Mojo Star galloped honestly on to claim second place yesterday — just as he did behind Adayar in the Derby. He could be a force in staying races next season. 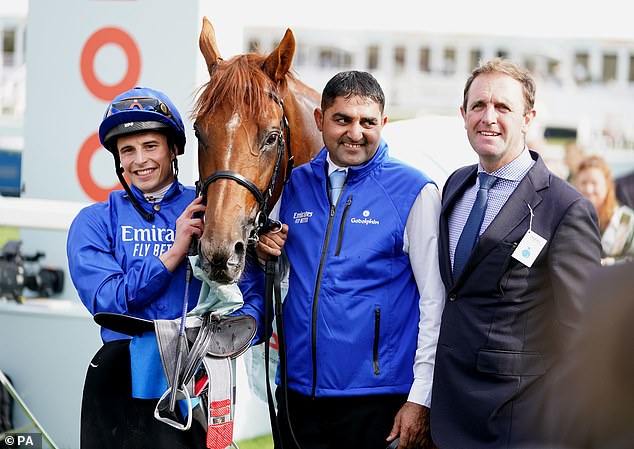 The rest of the Leger field were made to look pedestrian, with The Mediterranean the first home of O’Brien’s four runners. O’Brien’s increasingly disappointing High Definition, who had been supplemented to the line-up for £50,000 and was ridden by Frankie Dettori, beat only one home, the apparent non-stayer Ottoman Emperor.

O’Brien did better at Leopardstown as St Mark’s Basilica made it four Group One wins from four runs this season when edging out Tarnawa and Poetic Flare in a thrilling finish in the Irish Champion Stakes, surviving a stewards enquiry.

The Queen’s hopes of a Classic win in 2022, her Platinum Jubilee year, were dented when odds-on favourite Reach For the Moon was beaten a head by Bayside Boy in the Group Two Champagne Stakes at Doncaster. John Gosden, who trains Reach For The Moon with son Thady, reckoned the rain-softened ground did not suit his colt, saying: ‘Better ground, better horse.’

A re-match might be on the cards between Reach For The Moon and Roger Varian-trained Bayside Boy, who is a 14-1 shot for next year’s 2,000 Guineas, in the Dewhurst Stakes at Newmarket next month.