It was a first win for a filly in the one-mile feature race of Glorious Goodwood since Soviet Song in 2004 and the first success for a three-year-old filly since Marling in 1992.

Balding reckons his 7-2 shot, who is now a three-time Group One winner having also landed the Cheveley Park Stakes last season and the Coronation Stakes at Royal Ascot in June, is special.

She is providing mounting evidence to back that up after her length-and-three-quarter win from the 2,000 Guineas and St James’s Palace Stakes winner.

Murphy wanted to play Alcohol Free late after she was left in front too soon when third to Snow Lantern in the Falmouth Stakes at Newmarket earlier this month and that rival had to settle for third as it is played out perfectly for Murphy.

Balding, who won the Sussex Stakes in 2017 with Here Comes When, said: ‘Watching her work is demoralising for the other horses. We have to keep swapping the lead horse because she is just so, so good. You see her afterwards and she is hardly blowing.

‘It was lovely to see her do that because we have always believed in her. It is no easy task taking on the colts and older horses and to do it in that style was just fantastic.’ 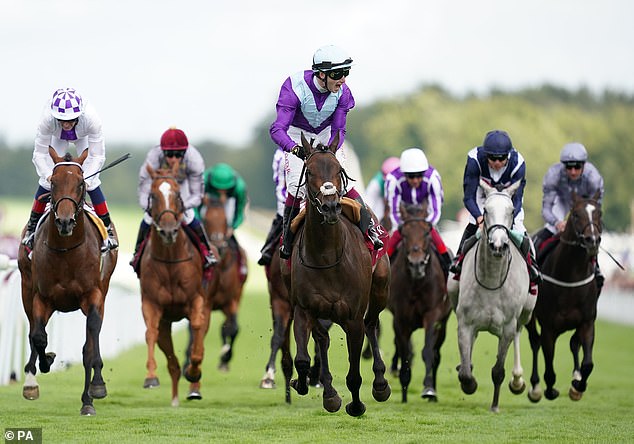 Alcohol Free gave owner Jeff Smith his second Sussex Stakes 37 years after his initial win with Chief Singer. Like Chief Singer, she might now step up to a mile and a quarter in next month’s International Stakes at York, hoping to better his third place.

The future for Jim Bolger-trained Poetic Verse will be finding somewhere to race on faster ground.

Jockey Kevin Manning was in urgent mode on his mount three furlongs out and reckoned tacky ground had ‘blunted his speed’ just as it did when the colt was sixth in the French 2,000 Guineas.

Balding is enjoying a brilliant season, which also includes four winners at Royal Ascot. The £567,000 won by Alcohol Free, plus the £18,000 secured by winning stablemate Achelois later on the card saw him move past £2.5million for the campaign and onto the heels of leader Charlie Appleby in the Trainers’ Championship, which Balding’s father Ian won in 1971.

Trainer Richard Hannon missed out with Snow Lantern but landed the Molecomb Stakes with Armor. The Ryan Moore- ridden 6-1 shot beat Fearby by three-and-a-quarter lengths and will have his sights upped to Group One level in next month’s Prix Morny at Deauville.